English Study Concludes That “Over Half” Of Bicyclists Run Red Lights (In Other News, The Sky Is Still Blue) 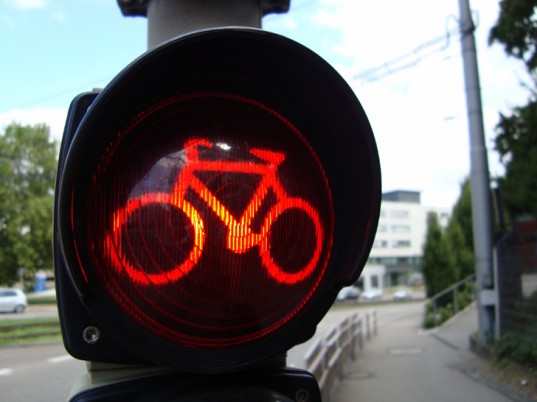 [London Evening Standard] Cyclists were filmed jumping red lights by hidden cameras set up by London black cab drivers. Their footage shows 194 out of 364 riders went through stop signals during the rush hour — just over half.

The Licensed Taxi Drivers Association said it set up hidden cameras after a series of “near misses and confrontations” between its members and cyclists. The association said cabbies put two cameras at what they said were “average” crossroads in the capital.

The LTDA, which has 10,000 members, said each camera filmed between 7.30am and 8.30am at the end of September. In Hackney, 108 out of 170 cyclists jumped the lights, while in Camden, 86 out of 194 bikes rode through at red. LTDA general secretary Steve McNamara said two hour-long versions of the footage were available “ 100 per cent unedited” on YouTube.

He said: “We are constantly hearing  from the cycling lobbying groups that cyclists who ride on the pavement, weave in and out of traffic and fail to stop at red lights are a small minority or a small rogue element. This was in stark contrast to what we and most Londoners witness every day.” Mr McNamara, who cycles in the rush hour daily, added: “What we found shocked even us. We’re not anti-cycling, we’re against the unlawful cycling brigade.”

Noooo! Say it ain’t so! Bicyclists running red lights and putting the public in danger? Surely not! Good, upstanding citizens like these would never do such a thing!

In all seriousness the only shocker here is that MORE of them didn’t run red lights. I mean only 53% of them did it? That’s flat out crazy. I mean I assume they must have known they were being videotaped somehow. That’s the only possible explanation. Well, that and the fact that this study was conducted in England. The English are so goddamn polite. I guaran-fucking-tee you that if this had been done in New York City instead of London, it would have 364 out of 364 drivers running red lights, with at least 15 deaths caught on camera.