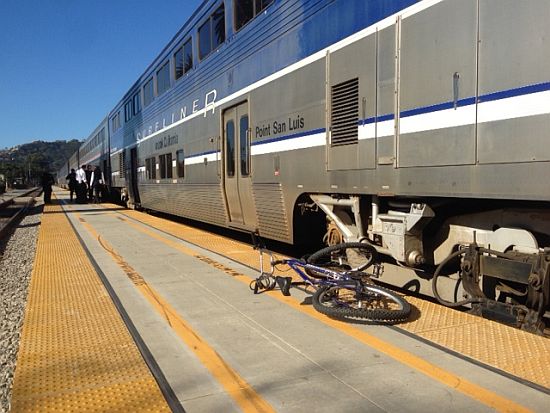 [EDHAT] A bicyclist, who ignored warnings of an approaching Amtrak train, tried to cross the tracks in front of the train as it arrived at the Santa Barbara Station. He was dragged along the platform, with his bicycle, 60 feet and then ended up beneath the train. The bike was dragged a hundred feet past the point where he lay. He was transported to Cottage Hospital in moderate condition.

Santa Barbara City Fire crews and AMR medics treated the 45 year old male for injuries to his legs and took cervical precautions as they prepared him for transport to Cottage Hospital.

The incident occurred at 0930 this morning as a Southbound Amtrak passenger train approached the Santa Barbara train station on lower State Street. The man was extricated and transported by 0950.

The Santa Barbara City Fire Department urges all citizens to exercise extreme caution at all train crossings and to heed all warnings associated with train traffic.

Before you start giving me shit, read the article. The dude is gonna be fine. Which means it’s totally fair game to give him shit for being one of the dumbest human beings on the face of the earth.

I’m not gonna sit here and tell you that I’ve never thought about ignoring the warning signs and scooting across the tracks ahead of an oncoming train. But that’s where the similarities end. Because while I don’t LIKE sitting in my car for 20 minutes while a cargo train full of bullshit and shattered dreams rumbles past at three miles an hour, I ALSO don’t like the idea of my car stalling on the tracks and getting me run over by a hundred thousand tons of steel. Just a little personal preference I have about not dying. I’ve seen the movies. I know what happens.

But not bicyclists. We’ve long since established that 99% of the rules that bicyclists so cavalierly disregard are put in place for their own safety. Believe it or not, the law against running red lights isn’t there to annoy you. It’s actually there to make sure you don’t get obliterated by a car going the other direction. Same deal with the whole train thing. The barrier isn’t there to ruin your day dude. It’s to stop you from being run over by a train, dragged 60 feet, and pinned under the engine until they can “extricate” you.

Honestly, what I can’t figure out is how this guy got run over in the first place. Like how do you misjudge the timing that badly? A train would have to be PRETTY FUCKING FAR AWAY for me to risk darting out in front of it. And you’re riding a bike. It’s not like the bike can stall on the train tracks. So what happened? What’s the deal? No depth perception? No understanding of collision physics? No concept of your own mortality? This could provide fascinating insight into the twisted mind of the bicyclist, and I for one am dying to know.