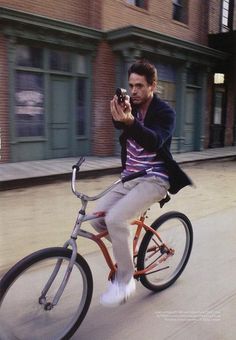 [KXXV] WACO – A man is in jail after running from authorities following a bicycle traffic stop.

Police say they pulled the man over around 2:15 Tuesday morning in the 2100 block of Dutton Ave. because he was riding his bike on the wrong side of the road. When officers approached the suspect, he took of running.

According to police, the man reached towards his pant leg multiple times before jumping a fence. An officer caught up to the man and used a stun gun fearing for his own safety.

Police found a gun and a small amount of drugs on the suspect. He’s now in the McLennan County jail.

At this point I’d be more surprised if I can into a bicyclist and he DIDN’T threaten me with a gun while high on mescaline. I mean, what can you really say about this guy? If you asked me to invent a generic headline for a potential blog, “Gun-Toting Bicyclist Arrested With Drugs” is exactly what I would have come up with. It’s perfect. Almost TOO perfect.

We all know that bicyclists are a roving cabal of lawless sociopaths, but I’d appreciate a little creativity at this point. You can’t just run around with drugs and guns and get arrested. That’s not exciting. That’s just par for the bicyclist course. I mean, at LEAST try to eat the drugs before the police get to you. Throw the gun off a bridge or hide it in a baby’s stroller. SOMETHING. The only thing worse than a lawbreaker is a boring, predictable lawbreaker, and this guy might as well have answered the casting call for Typical Bicyclist #7.

Of course, the real hilarious part of this story is the fact that he hopped off his bike and attempted to flee on foot. That’s the best thing about these bicyclists. When push comes to shove, they can’t even stand by their own convictions. “Bicycles are the only mode of transportation anyone could ever possibly need!” they cry. But the second it starts to drizzle they go running for their cars. The minute they have to cross a little “ocean,” they trade in their spandex for plane tickets. And the minute the cops are hot on their trail, that bike gets tossed on the side of the road like a crumpled up McDonald’s wrapper. Just stand by your principles for me ONE TIME, hypocrites.