When The Entire World Gets Ebola, You Can Just Go Ahead And Blame Bicyclists 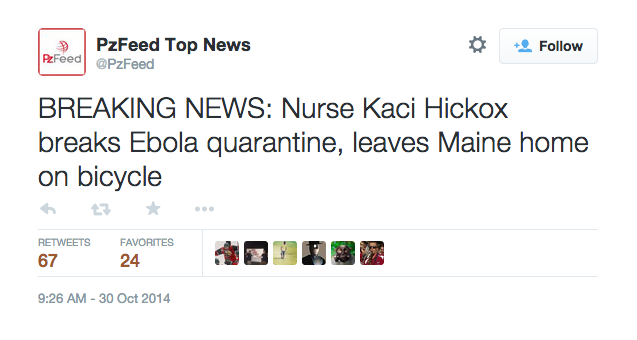 Wouldn’t it be great to be surprised by this news? Wouldn’t it be awesome to have your head so far in the sand that you could read this and be shocked? I guess I’m just a little too jaded for that. I just can’t help being a realist. I’ve met one too many bicyclists. Read one too many stories.

Because this is Bicyclist 101 right here: “Maybe I have Ebola, maybe I don’t. Maybe I’ll infect the whole world and bring about the end of modern civilization, maybe I won’t. All I know is I want to ride my bicycle right fucking now, so that’s what I’m going to do.” I have to say, it must be nice. It must be nice to care so little about the rest of the world that you can drop all other concerns up to and including causing the goddamn apocalypse and just ride your bike around town. You can’t buy that sort of piece of mind. But apparently you can get it for free just by throwing on some spandex and hopping on a bicycle.

That’s just the way they are though. Apparently this woman is just going to ride around town sowing the seeds of Ebola like a pestilent Johnny Appleseed. You watch what happens. Just watch. Guaranteed the rest of the bicycling community will jump to her defense with pseudoscience about how “actually, cars are to blame here, because the air circulation system in a car serves as an effective incubator for the virus, ALL WE HAVE TO DO IS GET RID OF CARS AND EBOLA WILL BE GONE FOREVER!” It’s gonna be great.

PS. Is it possible the End Times really are upon us? I have to admit I always thought the Four Horsemen of the Apocalypse would ride, well, horses. But then again the book of Revelation was written a long-ass time ago. Poor St. John probably had no idea what he was looking at. Probably saw the Rider of Death on her shiny metal bicycle and just went “ahh what the shit is that, fuck it, I’m on a deadline, just gonna call it a horse.”

2 Responses to When The Entire World Gets Ebola, You Can Just Go Ahead And Blame Bicyclists