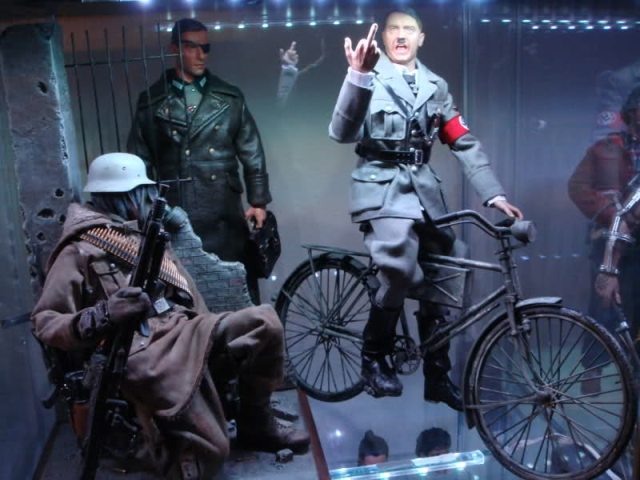 [Times of Israel] CHICAGO — An actor stands up on a podium and holds a paintbrush stained with black pigment to his nose, approximating Hitler’s moustache.

“My fellow citizens, our country is in crisis. We must rid ourselves of the monstrous perversion that is destroying society. Who is to blame for all our troubles? The Jews!” declares “Hitler,” in the play within a play.

Rather than finding a beer hall packed with yes men, however, “Hitler” is surprised to hear a resounding “And the cyclists!” (bicycle riders) every time he tries to incite violence against the Jews. Finally exasperated — as the script describes him — “Hitler” asks his assailant, “Why the cyclists?” The young man responds unfazed, “Why the Jews?”

“Cyclist” tells the story of Bořivoj Abeles as his world is overrun by escaped inmates of an asylum, who track down and murder all of the world’s cyclists. Švenk’s depictions of irrational and evil tyrants are very thinly veiled references to Nazis.

Before some bikefuck gets uppity and tells me that this play isn’t REALLY about bicyclists, let me ask you: do we really need another play about how evil Hitler was? Uh, we get it bro. Hitler was bad. Pretty sure everyone already knows that. So as much as bicyclists will claim this is just a metaphor, it’s not. No, bicyclists are just hiding behind that thin veil of plausible deniability so they can play the victim card while acting like philosophers and humanitarians.

And really, has anything ever summed up the bicyclist mentality better than this?  We already know they see themselves as helpless victims. But just straight up comparing themselves to the Holocaust? I mean I know I exaggerate a lot on this blog, but apparently I’m a bumbling amateur in the hyperbole game compared to these fuckers.

I’d honestly love to chat with any bicyclist who thinks this way. “Cop gave me a ticket for running a red light? I TOTALLY UNDERSTAND HOW THE JEWS IN AUSCHWITZ FELT.”

PS. I’m not saying that all bicyclists should be killed. I would never say that. But at the same time the world WOULD undeniably be better if Hitler had gone after the bicyclists instead of the Jews, right?

I hate bicyclists. My only regret is that I can't grow a beard.
View all posts by Falco →
This entry was posted in Stupidity and tagged bicycle, bicyclist, bike, biker, biking, cycling, cyclist, darwinism, Hitler, idiots, natural selection, plays, savages, stupid twats, vagabonds. Bookmark the permalink.