[Gizmodo] First off, save me your fucking moralizing: everybody walked away from this just fine, which means it is absolutely 100% fine to laugh at this bicyclist getting flipped 7 feet in the air and landing on his fucking brainstem.

And seriously, is it even possible to not laugh at this? Just look at that picture up there. The dude is still in the cycling position even as he’s being flipped end over end over a motorcycle. That’s how disconnected from reality bicyclists are: not only do they not think the laws of the road apply to them, they apparently don’t even think the laws of physics apply to them. It never entered into this guy’s head that he could be forcefully removed from his bike. Even while it’s happening his brain won’t accept it. “It feels like I have been sent hurtling through the air, but surely that is impossible, for I am of the immortal cabal of bicyclists. JUST KEEP PEDALING, LEGS.”

I guess this just drives home the point I’ve been trying to make for ages: bicyclists have no concept of how fragile their vehicle of choice is. I mean this dude didn’t even get hit by a car. He got hit by a motorcycle, a vehicle which is only slightly larger than a bike, and STILL got obliterated. Look at this shit: 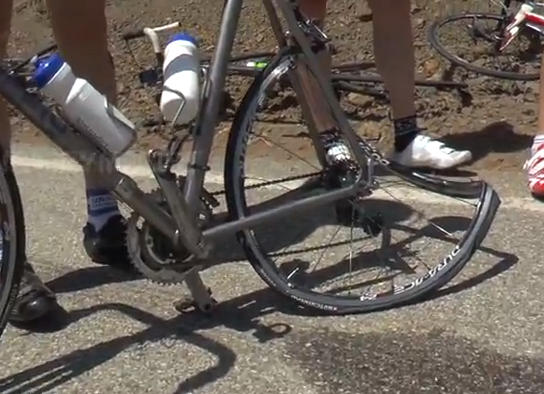 No no, it’s cool guys. No need to stop at red lights. I mean we just watched a tiny motorcycle eat this dude’s bike alive when it hit him while going the SAME DIRECTION as him. I’m sure you’ll be fine when a mack truck t-bones you on the way to the skintight bodysuit store.

Anyway, enjoy watching this video 500 times like I did:

PS. That’s right: I’m back, baby. Sorry for the lack of content.

I hate bicyclists. My only regret is that I can't grow a beard.
View all posts by Falco →
This entry was posted in Stupidity and tagged bicycle, bicyclist, bike, biker, biking, road warrior. Bookmark the permalink.