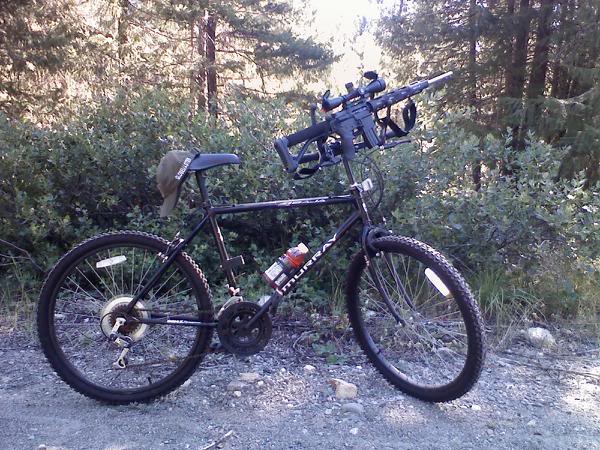 A bicyclist with a holstered handgun was detained by police and released without charges this morning after causing a lockdown at Grand Junction High School.

The bicyclist, a man who Grand Junction Police Sgt. Dave Stassen described to be in his 50’s, was reportedly observed by a student around 8:40 a.m. riding near the school, while the student reported her observations to staff. Police flooded the area, detaining the man at Fifth Street and Orchard Avenue. He was questioned and released by officers, who returned the man’s gun.

The man had a loaded .45 caliber handgun on his hip, which was in plain view of officers, Stassen said. He also had a valid concealed-weapons permit, Stassen said.

“He was advised it’s probably not a good idea to ride around a school with a handgun displayed,” he said. [Grand Junction Daily Sentinel]

Just just a bicyclist riding around a high school with a loaded handgun strapped to his hip. Nothing to see here. Don’t the police know that laws don’t apply to you when you’re on a bike? I don’t even know what they’re so worked up about. He’s just riding around the school, letting the kids know he’s there. Letting them know he demands respect. Letting them know there are consequences if they misbehave.

Yeah okay so he didn’t actually threaten anybody with the gun. But come on. Nobody rides around with a gun in plain view unless they’re trying to say something without saying it. The message here is obviously that bicyclists hate schools. And you know what? This time, I ain’t mad. High school kids are PUKE.

I hate bicyclists. My only regret is that I can't grow a beard.
View all posts by Falco →
This entry was posted in Criminals and tagged bicycle, bicyclist, bike, biker, biking, road warrior. Bookmark the permalink.