Oklahoma City Gets It, Is Considering A Three Foot Rule For Bicyclists Instead Of Drivers 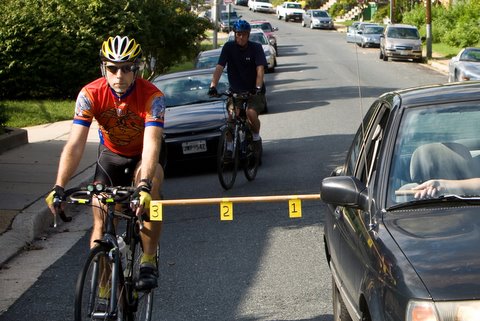 [Bike OKC] A new ordinance put forward by councilman Pat Ryan (Ward 8) would require bikes to maintain 3 feet between themselves and any motor vehicles traveling in the same direction.  The measure has been approved by the Oklahoma City Traffic Commission and will go before City Council in January.  The law currently states that drivers must provide 3 feet between their cars and cyclists when passing.

In addition to cyclists giving 3 feet to cars, the ordinance has additional language about where they should be riding.  For example, the proposed ordinance states “every person operating a bicycle upon a roadway shall ride as near to the right-hand side of the roadway as is safe”.  This basically negates the signs posted around town allowing cyclists to use the full lane, which is the safer way to ride on street without a bike lane, and forces them to ride in the gutter.  The ordinance also states that “persons riding bicycles shall not ride more than two abreast except on bicycle paths” and “when riding on roadways with designated bicycle lanes, the bicycle operator shall ride within the bicycle lane”.

Well how about that for a light in the darkness! Oklahoma City knows what’s up!

I absolutely LOVE how bent out of shape bicyclists are about this. It’s the most common sense rule in the history of rules. In fact, it doesn’t even REALLY say it’s a “three foot rule,” it says they need to ride “as near as is safe” to the right-hand side of the road. The fact that they aren’t already doing that basically proves the bicyclists are subhumans with zero common sense or survival instinct. Well, either that or they’re litigious asswipes who value the opportunity to sue the pants off a law-abiding motorist more than their own personal safety.

Either way, putting the onus on bicyclists instead of cars is a surefire way to make sure bicyclists at least have to stop and consider what they’re doing. Even if all they’re considering is how their actions will reduce the likelihood of a successful lawsuit. Hey, progress is progress.

2 Responses to Oklahoma City Gets It, Is Considering A Three Foot Rule For Bicyclists Instead Of Drivers